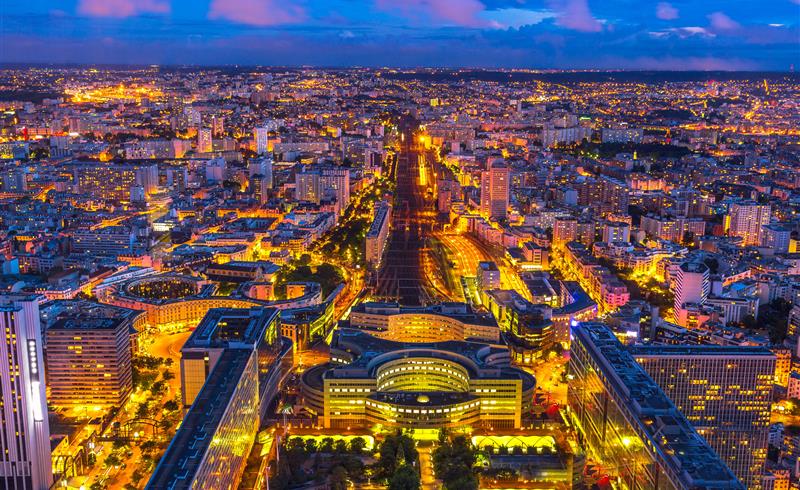 Between the 14th and the 15th districts, the Montparnasse train station welcome from the late 19th century to the early 20th century lots of Britons exiled in Paris. The Montparnasse neighborhood quickly becomes the Armoricain stronghold in the capital. In the 60s, a great project of reconstruction which included the construction of the Montparnasse Tower from the top of its 210 meters offers a panoramic view on Paris and its areas.  In 1990 the station is restored again and they add a new glass façade called “Porte Océane” (The Ocean Door) and a little square called “Le Jardin Atlantique” (The Atlantic garden).

Always in the 10th district of Paris, The Gare de l’Est station is a work of the architect François-Alexandre Duquesney and of the engineer Pierre Cabanel De Sermet. On the architectural side, the Gare de l’Est is adorned with statues of its sculptors Philippe Joseph Henri Lemaire and Henri Varenne on the pediments which recall the Alsace and Lorraine origine of this station, initially called “Gare de Strasbourg”.

Located in the 12th district, The Gare de Lyon station served the East and South East of France as Rhône-Alpes and Mediterranean regions. The Gare de Lyon station also served Bâle and Zurich in Switzerland, Turin, Milan and Venice in Italy, Fribourg-in-Brisgau in Germany and since 2013, and Barcelona in Spain. The station distinguishes her from its belfry, 67 meters and decorated on its four façade with clocks faces. On the first floor, a restaurant called “Le Train bleu”, renowned for its cooking coming from Lyon, is classified as a historic monument with its style from the Second Empire.

Commissioned in 1837 and situated in the 8th district of Paris, The Gare St-Lazare station serve a part of Normandy. Registered as a historic monument, the station houses the facades and roofs of the older hotel “Terminus Saint-Lazare”, which become then the Concorde Opera Hotel. Since 2012 the station has been modernized with the transformation  of the older room of “pas perdus” to a mall on three levels. In 1877, Claude Monet find his inspiration walking into the different spaces of the station. Then he paints a serial of twelve paintings about the railway universe of the Gare de Lyon.

Located in the 7th district of Paris, next to lots of ministery , the Orsay Station also called Orléans Station is since 1986 a museum over the 19th century art. The Orsay Museum gives importance to the monumental sculptures, architecture, decorative arts and music. There is also a lot of exhibition.

Her first vocation was welcoming visitors and foreign dignitaries whose come to Universal Exhibition of Paris. The architect Victor Laloux imagines this building which distinguishes by a metal canopy structure. Three stately statues represent the three principals’ destinations served by the “Compagnie d’Orléans”, as Bordeaux, Toulouse and Nantes.